Just wanted to drop by real quick and let you know that the Rider’s Revenge Trilogy is now available as an ebook box set. So if you haven’t finished the whole series yet, it might be a good option for you. 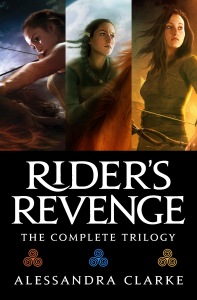 And since I don’t have a new book to offer you just yet, I thought I’d mention a couple books I just finished reading and enjoyed.

First was The Hills Have Spies by Mercedes Lackey. I’ve been a fan of hers for years but the last few books had left me a little meh. This one, though, I really enjoyed. So if you’ve drifted away from reading her in recent years, this one’s probably worth trying.

Second was the Fallen Blade series by Kelly McCullough which starts with Broken Blade. There was a little too much cussing in them for my mom and a little too many references she didn’t understand, so probably not for the more casual fantasy reader, but I really enjoyed the series. I’m on book six now and have yet to be disappointed.

First, apologies to anyone who was reading the Rider’s Revenge series through KU since it’s no longer in KU.

For all of those who were waiting for the ebooks of the series to be available on platforms other than Amazon, they are! Yay.  (I would’ve made this announcement earlier in the week but the books were hung up at Nook and, to a lesser extent, Google. Technology is wonderful and horrible all at the same time.)

And, because I wanted to make sure everyone had access to the same promotional price, Rider’s Resolve is currently $2.99 (or whatever the equivalent to that is in other currencies).

Also, if you haven’t yet bought book 2 there will be a promotion on the entire series the first week of October and book 1 will be 99 cents and books 2 and 3 will be $3.99 during that week.

You’re probably wondering when the next book will be out.

Hard to say. I have a weird working style that involves thinking a lot about a book before I sit down to write it and, perversely, writing non-fiction while I’m doing so.

Good news is I’m about at the end of the non-fiction portion of that process. (If you have any interest in Microsoft Excel I just published four titles related to it under M.L. Humphrey. No? That doesn’t sound as interesting as flying horses? Fair enough.)

I have one more non-fiction title to write and then I’ll turn back to novels at the end of the month. At that point it’s probably six months until I’ll have the next novel ready to publish.

But no promises. Life is tricky and unpredictable and full of curve balls.

The Rider’s series is rolling out of KU at the end of the week. So if you’ve been reading the books through Amazon’s Kindle Unlimited program and think you’ll want to finish it, borrow the books before September 8th. You don’t have to read them before then, you just need to borrow them before then.

That means that for those of you who wanted to read the Rider’s books in ebook format and on a platform other than Amazon that you’ll be able to do so in less than a week! As promised, Rider’s Resolve will be priced at $2.99 for the first couple weeks so you can get the same discount people on Amazon got when the book launched.

Hope you are all doing well, and for those in the U.S., enjoying a nice holiday weekend with friends and family.

Today is the day. My first fantasy trilogy is not only completed but live and available for you to read.  So if you’re a Kindle Unlimited subscriber who couldn’t pre-order, it’s there to borrow now.  Paperback is live, too, for those who are old-fashioned like myself and still prefer to read that way.

It’s a nice feeling to have finished such a massive undertaking.  I still don’t know why I write–I’m not one of those people who lived and breathed writing from the day I could walk–but there seems to be something about it that gives me a great deal of satisfaction.

What’s next? One week to rest.  Two weeks to attend a writing workshop where I’ll learn how to make the next series even better.  And then it’s on to the next one.  Hope to see you there when it’s ready. 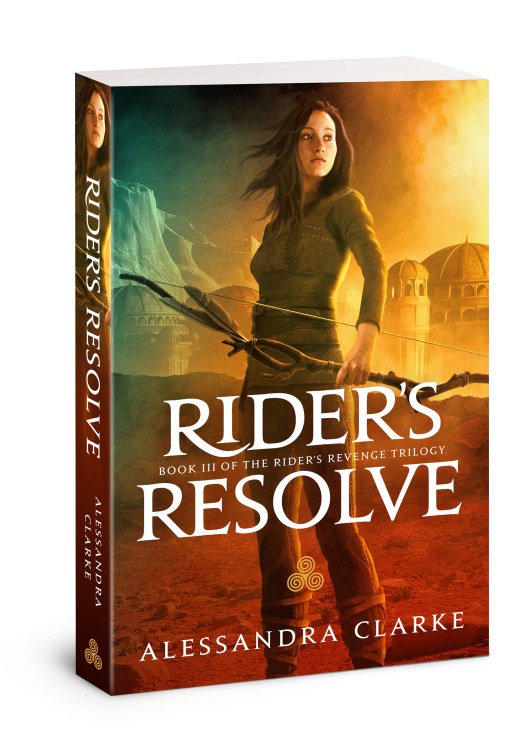 The final book in the Rider’s Revenge Trilogy, Rider’s Resolve, is here!  Well, almost. It’s up for pre-order on Amazon, so you can reserve an e-copy now and get it when it’s available for sale on June 11th.

The paperback should be live by the weekend, too. I just need to receive a physical copy of the proof tomorrow and make sure the cover looks as good in print as it does on my computer, but I trust that Kirk knows what he’s doing and it will be gorgeous just like the other two have been.

Because it is, isn’t it?

The reason I’m posting this today instead of waiting until June 11th is because I’m also running a sale this weekend to celebrate.  A BIG one.  So if you aren’t caught up on the series yet, now is the time to do so.

Rider’s Revenge will be FREE from June 8th through 11th. (A good chance to get a copy if you borrowed through KU but didn’t buy it yet.)

And Rider’s Rescue will be only $2.99 during that time.

That’s a savings of over $10 between the two, plus if you get Rider’s Resolve at its special introductory price of $2.99.

(And, as I’d mentioned previously, for the first three months the ebooks will be exclusive to Amazon.  If you’re one of the small number of people that impacts, reach out to me and we’ll find a way to make it right for you.)

This site uses affiliate links, so if you click on a product link from this site and purchase a product the owner of the site may be compensated for directing you to that vendor.